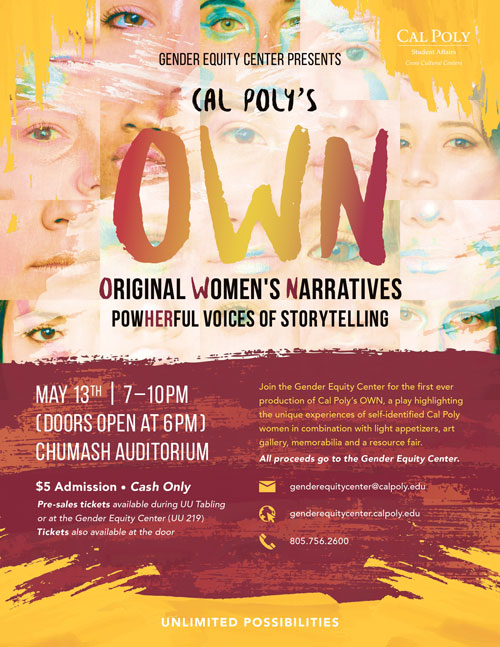 The Cal Poly Gender Equity Center (GEC) is one of three Cal Poly Cross Cultural Centers. It supports and empowers all students who identify as women by creating a strong community, educating about feminist, womanist, and mujerista-based movements, exploring identities through an intersectional lens, and striving for social justice.

During the 2015-16 academic year, students and staff in the Gender Equity Center created and produced Cal Poly’s “Original Women’s Narratives (OWN): PowHerful Voices of Storytelling.” OWN is a “play created by and for women, highlighting intersecting identities to empower women to share their own voices and in doing so experience the power of storytelling for themselves.” Topics explored in OWN include gender, feminism, social justice movements, race, ethnicity, culture, class, academics, family dynamics, sexual orientation, faith/spirituality, body image, sexual violence, sex, relationship, love, power, oppression, privilege, personal growth and more.

Political Science major Katie Ettl was the co-art and decoration lead for OWN. She shared, “OWN inspired me to become a WGS minor because it showed me a whole new side of Cal Poly that I had never seen and I wanted to be a part of – one of inclusion and support for liberal arts at a polytechnic university.”

Other Women’s and Gender Studies minors also played an integral part in the OWN production. Charlene Jenny-Ann Cox, Jasmine Mae Viera, Mallory St. George and Megan Healy were cast members. Multiple WGS minors contributed stories, including Antoinette Diaz ("Women Are Not a Mystery"), Mallory St. George (“To the Boy That Told Me We Don't Need Feminism"), Jasmine Mae Viera ("These Words") and Megan Healey, an anonymous contributor and Amy Gonzalez ("I Got 99 Problems, But My Body Ain't One").