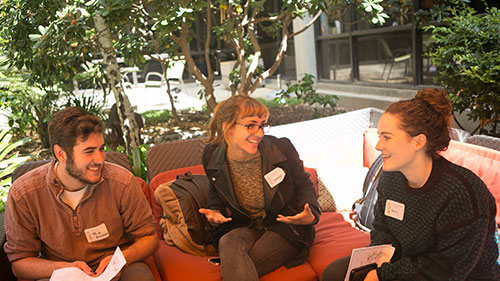 Nationally, Triota is the North American Women’s and Gender Studies Honor Society. However, Triota at Cal Poly is much more than an organization designed to recognize and celebrate student academic success in the interdisciplinary field of Women’s and Gender Studies. It is a feminist activist community committed to the idea that we are all accountable to and responsible for the communities and social norms in which we function.

Triota is also one of the only places on campus where emerging feminist leaders can practice feminist leadership in a 100% student-led and student-staffed organization. It is thus the primary site of feminist leadership training on campus. Triota members are part of a growing movement on campus to center equity, justice, inclusivity, and social responsibility as part of what it means to be a Mustang.

One example of Triota’s impact as a student organization on campus that stood out to Women’s and Gender Studies Department Chair Jane Lehr is related to bell hooks’ campus visit in spring 2015. The event was organized by the Office of University Diversity and Inclusivity. As part of campus preparation for hooks’ visit, the Center for Teaching, Learning and Technology organized reading circles for faculty. However, Triota members independently organized and facilitated the only reading group for students, faculty and staff. Lehr noted, “Many of the fantastic questions that students asked at the hooks event were generated by Triota's university-wide service to our community.”

During the 2015-16 academic year, Triota engaged the Cal Poly community in diversity initiatives in multiple ways. For example, Triota members organized to increase reproductive choices and justice at Cal Poly, in our community and in our nation. Triota also functioned as a campus leader in efforts to challenge cis-womanhood, and undertook an examination and expansion of its own branding and organization to increase its inclusivity. Many members of Triota were also active with SLO Solidarity, a coalition of organizations and individuals seeking to create a more just and equitable Cal Poly.

According to Lehr, “Triota members consistently demonstrate the value of integrating feminist knowledge production with feminist practice and a commitment to making feminism relevant to all members of the Cal Poly community.” For example, Triota’s members worked collaboratively to create the “31 Women” social media campaign that featured information about a different social justice leader every day of Women’s History Month in March. During 2015-16, Triota also participated in the organization of Cal Poly’s first-ever Self Love Week and worked with the Pride Center to develop the Queer Safer Sex Workshop that is now available as a resource to the university community.

Triota’s incoming president for the 2016-17 academic year is Zulema Aleman, a Psychology major with a minor in Women's and Gender Studies. “I am very excited to serve as president this upcoming school year. The 2016-2017 committee is currently brainstorming ideas for events,” she said. “One of our big projects addresses the high amount of anti-choice rhetoric and fear-mongering on our campus that occurred last academic year and how we can provide support and resources to our community by partnering with organizations like Planned Parenthood and Unite for Reproductive and Gender Equity (URGE).”

“I am inspired by the energy, creativity, compassion and organization of Triota and its membership,” Lehr said. “Students in this club make – I hope all of us – want to be and do more to contribute making Cal Poly an inclusive, diverse and equitable institution.”