Take Back The Night At Cal Poly 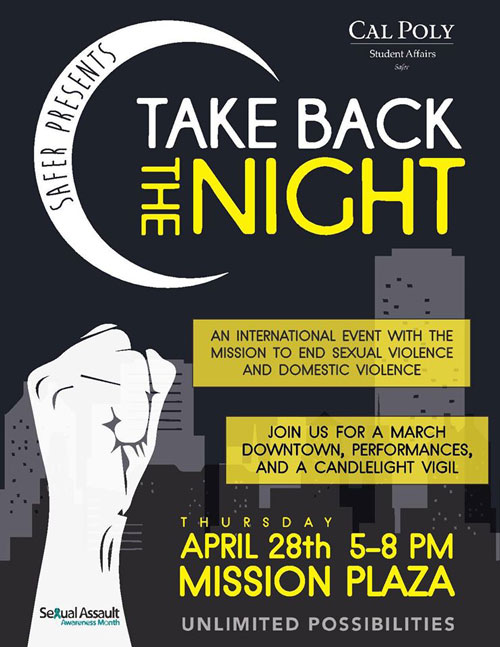 Safer and the Gender Equity Center (GEC) in the Dean of Students Office are long-term campus partners of the Women’s and Gender Studies Department at Cal Poly and have provided many WGS students with the opportunity to Learn by Doing.

Take Back the Night is an international event with the mission to end sexual violence and domestic violence. The two-part event – open to the entire Cal Poly and San Luis Obispo community – included an awareness march on-campus, a second march through downtown, performances and a candlelight vigil. Safer Director Christina Kaviani said, "Every year, Take Back the Night (TBTN) reminds me of the important work advocates and activists do to help victims and survivors, raise awareness and create a voice for the silenced. Every year, Take Back the Night reminds me that we have more work to do and we get to do it alongside incredible people.”

McCoy-Caso said, “Coordinating Take Back the Night in my senior year was one of my most valuable experiences while attending Cal Poly.” She started at Safer as an intern during her sophomore year and then became a student assistant. “I gained so many skills that I know I will use in almost any job setting,” she said. “My work at Safer and the support I received from my supervisors and peers helped me gain the confidence to pursue any project I am passionate about.”