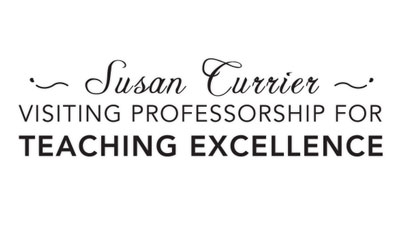 Statement on Anti-Asian Racism and Violence

In the wake of yet another horrifying act of white supremacist violence involving the murder of eight people—six of them Asian women—by a 21-year-old white man in Atlanta, Women’s, Gender & Queer Studies at Cal Poly is compelled to reaffirm our commitments to dismantling white supremacy, settle colonialism, and racist violence against the Asian, Asian American, and Pacific Islander communities locally, nationally, and around the world.

Considered in conjunction with recent reports documenting the exponential increase in violence and hate crimes against Asian and Asian American communities since the outbreak of the coronavirus pandemic— crimes that have been reported by Asian and Asian American women at twice the rate of men—the murders in Atlanta make it imperative that those of us engaged in WGQS teaching, learning, scholarship, and activism reassert and intensify our efforts to interrupt and dismantle the intersecting forces of white supremacy, misogyny, structural racism, and cisheteropatriarchy, among other forms of structural inequity.

In particular, it is important that those of us engaged in WGQS work reject any and all claims that the recent murders in Atlanta were not shaped by the pernicious conjunction of structural racism and sexism (as was suggested in some initial reports). Indeed, these recent events demonstrate, in all-too-familiar and appalling ways, the co-constitutive nature of white supremacy, settler colonialism, and cisheteropatriarchy. In WGQS, we stand against these destructive, malignant, and dehumanizing forces and their long histories of denigrating and fetishizing Asian and Asian American people, and especially Asian and Asian American women.

It is also important to acknowledge that, for some of us, these forms of hatred, violence, and murder are an active threat in our daily lives.

For those of us who do not endure the daily lived experiences of these threats, we have a particular responsibility to educate ourselves and those around us on these matters and to contribute to efforts to disrupt and prevent hatred and violence against the AAPI community. Some resources that can assist us in these efforts include (but are by no means limited to):

• To report an incident of hatred against the AAPI community: Stop AAPI Hate

• Statement from the Association of Asian Studies

• Statement from the NWSA condemning anti-Asian Violence and Racism

• The CCC-USS statement in solidarity with the Asian Immigrant and Asian American Communities.

Finally, as articulated in previous statements, WGQS at Cal Poly stands against all forms of oppression, and we recommit, both individually and collectively, to supporting all actions necessary to create a more just and equitable Cal Poly and world. If you would like to receive announcements from the Women’s, Gender & Queer Studies Community at Cal Poly, please email wgqs@calpoly.edu to join us.

WGQS at Cal Poly: Statement in Solidarity with Black Lives

The murders of Sean Reed, Ahmaud Arbery, Breonna Taylor, George Floyd, and Tony McDade are only a few of the most recent examples of the brutal, chilling, appalling, and ongoing anti-Black violence perpetrated by settler colonialisms, white supremacy, and police brutality in the United States. These murders, in conjunction with the long histories of anti-Black violence and systemic racism more generally, compel Women’s, Gender, & Queer Studies at Cal Poly to reaffirm our commitments to dismantling settler colonialisms and white supremacy.

Women’s, Gender, & Queer Studies at Cal Poly promotes scholarly inquiry, education, and activism in the service of transformative, widespread, and lasting social justice, and we call out historical legacies and contemporary manifestations of state-sponsored and state-sanctioned anti-Black violence and murder. As scholar-activists engaged in questioning and contributing to knowledge creation, community formation, creative practice, and policymaking from interdisciplinary and intersectional perspectives, we stand against the destructive, malignant, and dehumanizing forces and effects of settler colonialisms and white supremacy. Collectively and individually, we hold ourselves accountable by continuing to disrupt systems of privilege and oppression, with a particular focus on rejecting anti-Blackness in all its forms. We stand in solidarity with Black lives.

In addition, we echo the words of the National Women’s Studies Association’s Letter on Charlottesville from August 2018: “White supremacy and fascism have always been intricately connected with misogyny, patriarchy, transphobia, homophobia, ableism, anti-Semitism, and settler-colonial logics. [. . .] The NWSA believes that ending white supremacy is a primary feminist political objective. [. . .] We know that white supremacists seek to instill fear and leverage power using harassment, violence, and the threat of violence. We encourage NWSA members to join together and raise their voices in the wake of these threats even as we recognize that some of our members face greater risk than others in speaking out. We know that intersectional feminist analyses offer the frameworks our campuses and communities need to challenge white supremacist ideologies.”

WGQS at Cal Poly also acknowledges the groundbreaking and integral work of Black feminisms in WGQS as a discipline, and perhaps above all the foundational role that Black feminists—including, but by no means limited to, the Combahee River Collective, Audre Lorde, Angela Davis, bell hooks, Patricia Hill Collins, Kimberlé Crenshaw, Roxane Gay, and Keeanga-Yamahtta Taylor—have played in the development of and continued insistence upon intersectionality as a central tenet of feminist theory and practice and of social justice work in its broadest sense.

Finally, we stand against all forms of oppression and, now more than ever, we recommit to supporting all actions necessary to create a more just and equitable Cal Poly and world.

If you would like to receive announcements from the Women’s, Gender, & Queer Studies Community at Cal Poly, please email wgqs@calpoly.edu to join us.

The Racist Roots of American Policing: From Slave Patrols to Traffic Stops

The Case for Reparations

75 Things White People Can Do for Racial Justice

View a PDF of the letter

POSTPONED! No-State Solution: Palestine and the Question of Queer Theory

The March 10 talk has been postponed to fall 2020. We will share a new date as soon as possible.

Dr. Puar will review nation-state based queer theory from the last three decades and explore what queer theories of anti-nationalism, non-nationalism, and no-state solutions could entail, converging with work in Black and Indigenous studies and movements in Palestine.

In light of the recent social media post denigrating Undocumented communities, Women’s, Gender, & Queer Studies at Cal Poly writes to voice its support for and stand in solidarity with our Undocumented community on campus and across the Central Coast, as well as students, staff, and faculty in mixed status families. 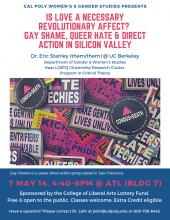 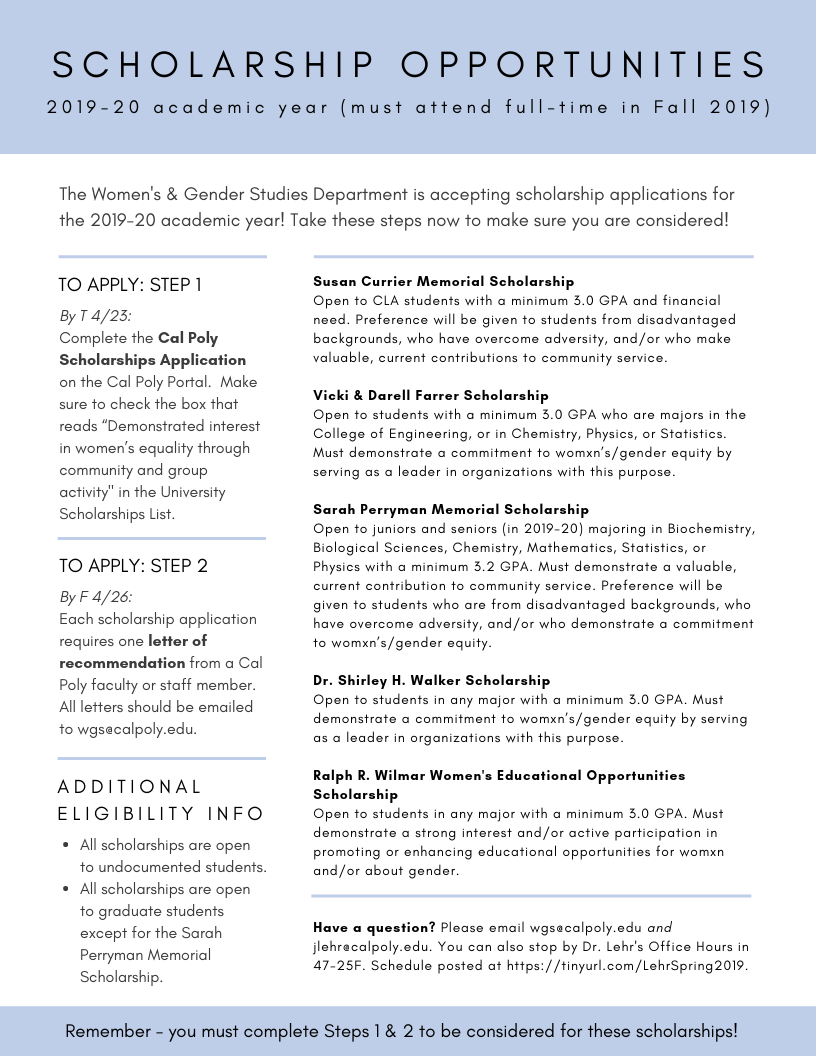 Apply on CalPolyJobs for our 2019-20 Recruitment!

What is sprinkle? sprinkle is an international undergraduate journal of feminist and queer studies that is published at Cal Poly.

Who can apply? Undergraduate and graduate students at Cal Poly who are passionate about research, knowledge, theory, and activism on gender, sexuality, and intersectionality in feminist and queer studies. Any student at Cal Poly can apply to be a member of the 2018-19 editorial team, whether or not they are minoring in Women's & Gender Studies and/or Queer Studies.

How can you learn more?

What are your next steps? 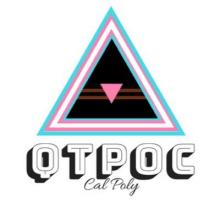 Many of you have already come across the alarming news of 45’s decision, released by the Department of Health and Human Services, to define gender in terms of immutable, binary (male/female) at-birth assignments. We at the Queer and/or Trans* People of Color Club firmly oppose this and all forms of legalized, state sanctioned violence against Transgender and Intersex people. Our definition of Trans* is broad, expansive, and inclusive of gender configurations beyond cisgender normativity.

We recognize this move not as an irresponsible act on the part of a few policy makers, but instead a measure that can be traced back to the instantiation of colonialism. Among the mechanisms of continued colonial conquest that persist with us, as we observe with this legal move, are the imperatives to erase Trans*, Non-binary, Intersex, Two-Spirit, and other gender identifications outside the colonial model from existence. However, “Trans has always resisted state erasure—which begins with the slave ship, the plantation, the settler colony and extends to the prison and more. We have always found new ways of forging life, the state can’t erase what it can’t even dream, can’t capture what it can’t fathom” [1]. The words of Che Gossett remind us of our ancestors’ vigilance and strength. This moment may feel incredibly heavy, but we are together in this, alongside and with our Queer and/or Transgender ancestors, resisting and surviving the colonial aim to eradicate us. They are with us. We are with you. We love you.

As long as there are people, gender will never be an uncomplicated duality. Deborah Miranda writes, “A Two-Spirit person is born regardless of biological genealogy. Thus we will always be with you. We are you. We are not outsiders, some other community that can be wiped out. We come from you, and we return to you” [2]. Similarly, Transgender and Intersex people will reemerge of the ashes. Our bodies perpetually re-member the past and produce Queer, Trans*, Two-Spirit [3], and Intersex futures. We can never be eradicated.

From the past, we can best glean the ways these tactics will largely harm Indigenous and Black populations, especially Black/Native Transgender inmates. Experientially, Trans* and Queer of Color communities know this to be true. Prisons are the site of anti-Transgender brutalization, and as Trans* and Queer students of Color, we are committed to ending the violences of captivity and anti-Trans* pathologization. We must always remind ourselves that we are connected intimately to one another. The violences our neighbors face are, too, our responsibility. Together, let’s continue to demand the return of Indigenous lands and lifeways, to envision and realize a world without prisons, create a world of where we may be our authentic selves, and bring ends to the ongoing violence of colonialism. Our communities will resurge,again and again. Let’s continue to imagine and carve pasts, presents, and futures together, that are Trans*, that are Queer, Non-binary, accessible, Intersex, Femme, Indigenous, Black, expansive, and radically inclusive.

With immeasurable love,
Queer and/or Trans* People of Color Club

[3] Two-Spirit is not an identity that can be extended to anyone but Natives who have a particular spiritual role in their community. In that vein, not all Queer or Trans* Natives are Two-Spirit.

As an organization of feminist scholars, NWSA embraces the dignity and humanity of all people, and condemns acts of violence and state policies that compromise that principle.

We are outraged and deeply saddened by the carnage that occurred in Pittsburgh on October 27, 2018 in which 11 people were killed at a synagogue before Shabbat services. This despicable act apparently carried out by one lone gunman filled with anti-Semitic hate and paranoia, however, occurs in a political climate where racism, white supremacy, Islamophobia and anti-Semitism are on the rise, condoned directly and indirectly at the highest levels of the government. While the gunman in Pittsburgh criticized Trump, he borrowed language that has been deployed by the president attacking immigrants and celebrating white nationalism.

Acts of violence like this one are steeped in a kind of toxic masculinity that seeks to dominate or destroy those deemed inferior in some way. While we do not know the personal history of the shooter in this case, we do know that one common fact shared by many mass shooters is a history of domestic violence. Thus violence toward women becomes a dress rehearsal for mass violence toward other targeted groups.

NWSA sends its condolences to the families and victims of the Pittsburgh shootings and pledge to continue to use our collective voice and platform to speak out against violence, hate and injustice.

SIGNED by the NWSA EC [Executive Committee] with affiliations*

(*affiliations for identification purposes only)